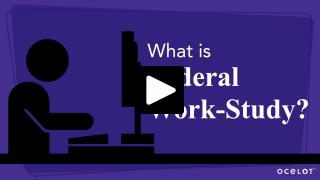 To be eligible for Federal Work-Study, you must

How much can I be awarded?

How much can I earn and how often do I get paid?

Students are paid a salary that is at least equal to the current minimum wage, but all current FWS jobs pay more than the minimum wage. FWS is different from the other financial aid programs in that a student is allocated a certain amount of money to earn. As work on the job is completed, a monthly time card is submitted for the hours worked just as at a regular job. Once a month, the student receives a paycheck for the hours worked for the previous month.

Can I work as many hours as I want?

No. The amount of work can't exceed your total FWS award authorization, or until the end of Spring 2021 semester, whichever occurs first. The maximum amount of hours is 25 hour per week. There is no guaranty that students will continue to receive FWS for the following year.

What if I have a conviction?

Students with convictions may be ineligible to work depending on the type and number of convictions.

This is a list of direct links to online applications for FWS student positions.